Who doesn't like a space that has some fresh decor?

After repainting the downstairs in "agreeable grey" by Sherwin Williams, all the holes from wall hangings were patched, sanded and repainted for a new start. Although most decor was going back to their same spot, I was questioning our stairway. For a while I really liked all the different size, style, shape, and designed frames staggered through our stairway, but recently I have been feeling we needed a little something different.

While I reorganized the attic a couple weeks ago, I also sorted through some wall hanging items that we just haven't used yet! Having most items from our attic and then I bought 3 things to fill in the spaces that were left, and those were so affordable because... They were bought at TJ Maxx, and Home Goods! I couldn't resist buying this beautiful rustic windmill (the one I bought was at TJ Maxx for $16, this is a link that is the exact same one) that easily hangs on the wall, as well as the "This is Us" wall canvas hanging (I could not find online but smallwoods creates beautiful canvas hangings very similar) and the small faux greenery wreath (the one linked was purchased at Home Goods for $12).

How was the staircase completed?

First, I laid everything out on the floor, and played around with it a couple times till I found the perfect layout. Next: I counted 2 steps in at the top and bottom and started hanging! I DID NOT measure guys! Some of you will ask why not?! I didn't because honestly, to have the staggered layout that I had on the wall, some of the decorations weren't exactly a rectangle or square, and as such it would have made it more confusing for measuring, and just would have wasted time. As pictured below, that is how I initially hung everything on the wall. But the windmill and hooks w/wreath I decided needed to be moved higher, because where the canvas was hanging, it had been placed  in a way that made it feel there was a gap.... Which meant more patching, but that was easy because it was only a couple small holes, but that was Ok! Each item was placed on the wall by either a drywall screw or command strip, ok which ones?

The Letter S and White frame were each put on the wall with a piece of command strip (that holds up to 9 lbs) on the back, everything else a drywall screw/nail was used, because there was nothing overly heavy that would need an anchor placed.

Voilà! After everything was placed accordingly, and little patches were made we were happy with the end result! It fits perfectly to our home's style, and feel, and just made the stairway look more inviting and compliments to the new wall color. 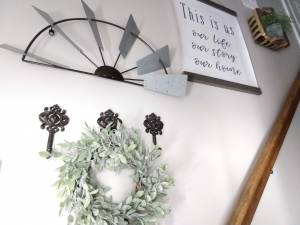 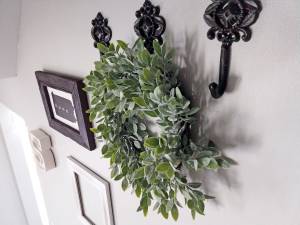 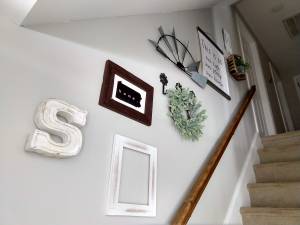 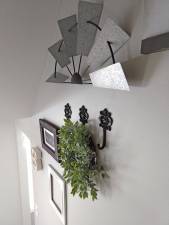 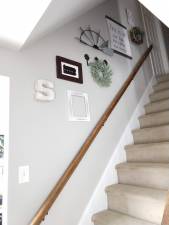 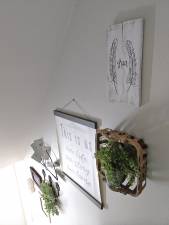 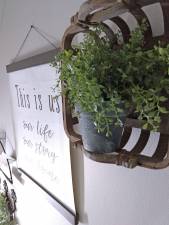 I know figuring out a way to fill your stairway (especially if it's a  bigger space) can be challenging, because the options are endless. Options such as: staggering picture frames, doing a collage of different things (like we had done) and the list goes on. So that being said, if you find that you are struggling to figure out what exactly would be a good fit for your stairway, contact me, and we can schedule a consult! 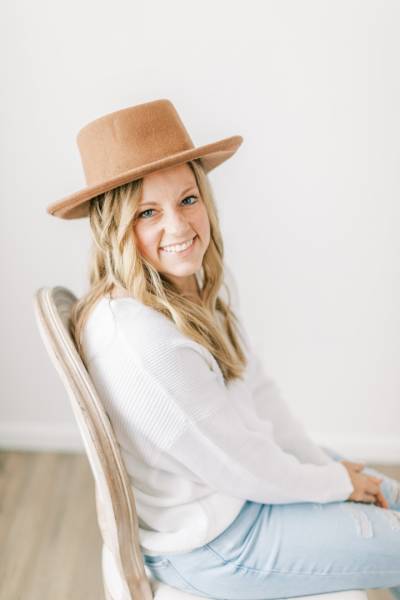 Brittany Kay Stevenson draws her inspiration from the joy of creating and bringing to life rooms that feel cozy, genuine, homey, and that bring families and friends together. Whether it’s vintage, classic, rustic, modern or even Victorian styles that you fancy, it’s Brittany’s goal to design spaces that reflect your tastes and style of living. She works with virtually any room in the house, and outside as well including livings rooms, dining rooms, bathrooms/vanities, bedrooms, family rooms, kitchens, offices, patios or other specialty rooms.

Our home was built in 1998, and oak was a super popular thing back then. As much as I love how it was a trend, I wanted this focal point to be… Read More

Our front entry coat closet just needed some TLC, because it was just plain old boring! It had one of those typical white-wire shelfs and that… Read More 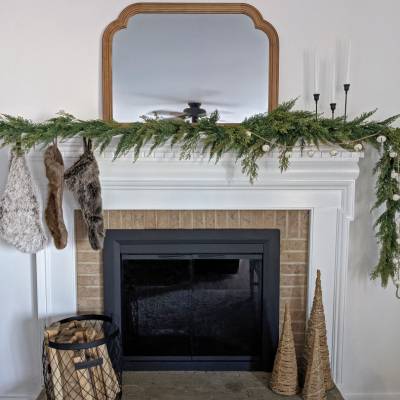 One of the things I have been wanting to change as a way to temporarily renew our living room space was to get rid of the orange-brown fireplace.… Read More